God Not Fazed by Reports of Non-Existence


Breaking News: God not Fazed by Reports of Non-Existence

Well, that’s it: game over.

The Express of London recently ran the online headline, “HISTORIC DISCOVERY: Physicists ‘PROVE’ God DIDN’T create the Universe” (emphasis and syntax theirs). In the first sentences, the article breathlessly announces that a team of Canadian scientists has proven how the universe appeared out of nothing, “and the findings are so conclusive that they even challenge the need for religion, or at least an omnipotent creator.” 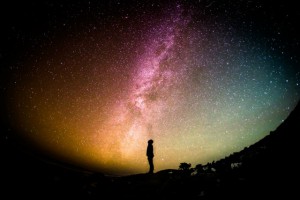 I’m not a scientist, but I do speak some Canadian, so I’ll attempt to summarize the team’s findings according to the article. The team starts with “virtual particles,” which come into existence out of nothing, existing only for a short time with low energy. It’s not a promising start for a universe, until one applies two ingredients: the theories of “The Minimal Length Scale” (measurements so tiny that time and space cease to exist) and “Doubly Special Relativity” (involving the colossal energy available just after the universe is born). Put those three ingredients in a bowl, stir vigorously and one gets “Inflation Theory:” the tiny energy and matter of a virtual particle get blown up into a 3.8 billion-year-old universe.

If you’re one of those smarty-pants who points out that nothing comes from nothing, the article has the answer. The universe, it says, is still nothing: it’s perfectly balanced between “positive matter energy” and “negative gravitational energy,” which when added together—like +2 and -2—equal nothing, and so nothing is the universe in which you live.

Nothing: it’s really something!

= nothing, where you live

= no need for God or religion.

As I said, I’m no scientist; but I would point out that this universe still had to come from somewhere, even if it averages out to nothing.

As for ruling out the existence of God, only the writer’s opinion does that: in fact, one of the scientists says that while there’s no need for God as “supernatural super man,” you still need God as “a great mathematician.”

As for the end of religion…well, there’s an awful lot of trust in things unseen on the part of the reporter. His faith makes you an accident in a universe of nothing, which logically makes you far less than nothing. In stark contrast, the Christian faith declares you a holy child known by God, redeemed at the price of Jesus’ own blood.

Finally though, theories are not the same as facts. They’re suppositions—educated guesses if you will. The history of science is full of theories that turn out to be partially or completely wrong, as scientists make inaccurate conclusions about the data they have. Sure, Christians will reject the article’s conclusions, like the means of origin, the proposed age of the universe, and the absence of God; but look! Given the evidence, it asserts that the universe was created suddenly, out of nothing, with great energy.

Unless I’m missing something, that basic premise agrees quite well with, “In the beginning, God created the heavens and the earth.”